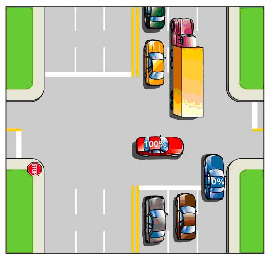 The courts will generally rule that the vehicle leaving the stop sign is 100 per cent at fault. It should not leave the stop sign if the traffic on the through street is approaching so closely that it is an immediate hazard.

However, if the vehicle has left the stop sign in a lawful manner, any through traffic must then yield to it. Responsibility depends on whether the driver leaving the stop sign made a sufficient and substantial prior entry into the intersection and whether there was sufficient opportunity for either driver to avoid the collision. (Motor Vehicle Act, Section 175)

The judge said that there was no evidence that the through driver had failed to keep an adequate lookout; she was not speeding, and could not have avoided the accident. The stopped driver, the judge said, had a clear duty to look to her right to see if there were any approaching vehicles, which may have been an immediate hazard to her. If she had looked, the judge went on to say, she would have seen that the approaching vehicle was a threat. Therefore, the stopped driver had a duty to yield the right-of-way to the through driver, and was 100 per cent at fault.

In the British Columbia Supreme Court case of Goerzen v. Sjolie [1995] WL 1743586, a fatal accident occurred in the District of Matsqui, in British Columbia. One of the drivers was in a car with her daughter and her daughter's friend. She approached the intersection and was stopped at the stop sign for her direction of travel. A truck was approaching from the east. It was approximately 50 feet from the intersection when the car left the stop sign and slowly entered the intersection. The truck hit the car, spinning it around and throwing the driver out of the car, killing her. The truck was the dominant driver as it was on a through road. There was not enough evidence to say the truck had been speeding.

The judge said the truck was so close to the intersection that it was an immediate hazard. Therefore, the car should have yielded the right-of-way. The car was 100 per cent at fault.