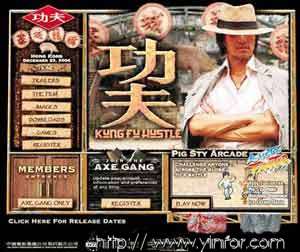 The best Chinese movie and the best comedy for this year. There is no super-hero., 27 December 2004
Author: lei su (lane-su) from Singapore

I watched Kung-Fu Hustel with my wife last night in a movie theater. Before we went to this movie we had heard of many good reviews about it. After approximate 100mins spent in the movie theater we were extremely surprised. This movie is even better than it was stated in those reviews. There were full of laughters and tears almost from the beginning to the end in the theater. Stephen Chow displays his talent as a director and an actor in Kung-Fu Hustle. It succeeds the previous Chow's style and humor in other movies, such as Xi Ju Zhi Wang and Xing Yun Yi Tiao Long. Whilst it was unexpected that so many CGIs were used in this movie. But what we love most in Chow's movies is that there is no super hero there. Today when everyone has been tired of the super heroes in the Hollywood-made movies, Kung-Fu Hustle brings you with the lives of ordinary people. Several characters in this movie were played by some Kung-Fu stars who are very popular and famous in the 1980's. This shows the respect of Stephen Chow to them. Above all, Kung-Fu Hustle is a movie with great hilarity, stunning CGI effects, fantastic Kung-Fu, and the lives of ordinary people. I give it 9 out of 10. Would like to recommend it to everybody.

Damn fine review. That makes it even more evident to me, that it's a "must see" movie. I'm really looking forward to it. I hope we share the same "odd" taste in movies, so i can share some of my thoughts about other similar movies.